A.I.T.A. Hall Of Fame: The Prisoners 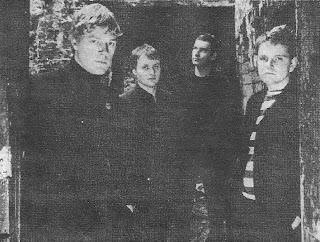 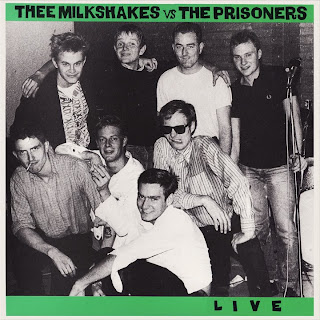 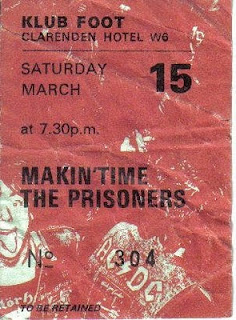 The Prisoners: Kings Of The Medway Delta
The Prisoners were formed in 1980 in Chatham, Kent, England. Their 1960s influenced garage sound made them a regular live fixture in London's "psychedelic revival" mini-scene of the early 1980s, and they often toured with sparring partners Thee Milkshakes, who included Billy Childish on guitar. The Prisoners' sound combined catchy, retro-flavoured melodies, punky guitar riffs, a Steve Marriott-esque vocal style and a lead instrument of the then-unfashionable Hammond organ.
After releasing several self-financed records and spending a year with Big Beat Records, in 1985 the Prisoners signed a new management deal with Acid Jazz that saw them move away from the London garage band tag and instead directly into the mod revival mainstream. The deal was unsuccessful and the band split up acrimoniously in 1986. They have however reformed for live shows several times since then, and managed to release a final one-off single in 1997.
Since splitting up the members of The Prisoners have featured in a wide range of bands. James Taylor and Allan Crockford formed acid-jazz act the James Taylor Quartet in 1986, although Allan Crockford is no longer part of their line-up. The Solarflares, who released four albums before splitting up in 2004, were Graham Day and Allan Crockford basically reprising The Prisoners sound along with drummer Simon "Wolf" Howard and Mr Parsley on organ. Other bands who have featured former members of The Prisoners are Planet, The Buff Medways, The Prime Movers, Thee Mighty Caesars, and The Stabilisers. Presently, Day fronts Graham Day & The Gaolers.
Albums
A Taste Of Pink! (Own-Up, 1982)
TheWiserMiserDemelza (Big Beat, 1983)
Revenge Of The Prisoners (Pink Dust, 1984)
The Last Fourfathers (Own-Up, 1985)
In From The Cold (54321 Countdown, 1986)
Rare & Unissued (Hangman, 1988)
Singles / EPs
There's A Time 45 (Skydog, 1983)
Hurricane 45 (Big Beat, 1983)
Electric Fit EP (Big Beat, 1984)
Whenever I'm Gone EP (54321 Countdown, 1986)
Shine On Me 45 (Deceptive, 1997)
Notable compilations / splits
Don't Let The Hope Close Down LP (Hope Springs, 1984)
The Last Night At The M.I.C. LP (Empire, 1985)
Thee Milkshakes vs The Prisoners LP (Media Burn, 1985)
Medway Vol.1 Powerhouse LP (Hangman Records, 1987)

"You can know the name of a bird in all the languages of the world, but when you're finished, you'll know absolutely nothing whatsoever about the bird... So let's look at the bird and see what it's doing — that's what counts. I learned very early the difference between knowing the name of something and knowing something."
Posted by Mr. Lee at 2:17 AM No comments:

And I watered it in fears
Night and morning with my tears,
And I sunned it with smiles
And with soft deceitful wiles.

And it grew both day and night,
Till it bore an apple bright,
And my foe beheld it shine,
And he knew that it was mine,--

And into my garden stole
When the night had veiled the pole;
In the morning, glad, I see
My foe outstretched beneath the tree.

"The Rings were formed by Twink (real name John Alder) veteran of many bands including Tomorrow and The Pink Fairies [as well as The Pretty Things and The Fairies]. While primarily a drummer he took on the role of front man in the band while Alan Lee Shaw played guitar and wrote the songs. Songs at the time included a mix of originals and Fairies numbers. Rod Latter played drums (later to join the Adverts). The band was completed by Dennis Stow on bass. A one off deal with Chiswick brought the excellent single "I Wanna Be Free" b/w "Automobile" in May 1977. The band played all the usual 'toilets' like the 100 Club and The Roxy." (Punk77)
In late '77, Twink was kicked out of The Rings and Alan Lee Shaw moved to vocals. The band renamed itself The Maniacs and issued the fantastic "Chelsea 1977" b/w "Ain't No Legend" 45 (United Artists)* and contributed two tracks to the Live At The Vortex LP before imploding. Shaw went onto play with The Physicals, Brian James Brains, The Hellions, Kristy MacColl, and The Damned.

Download: The Rings - I Wanna Be Free 45
Buy: The Chiswick Story double-CD
* To be featured in a future installment of 45 Revolutions.
Posted by Mr. Lee at 12:32 PM No comments:

"Good art wounds as well as delights. It must, because our defenses against the truth are wound so tightly around us. But as art chips away at our defenses, it also opens us to healing potentialities that transcend intellectual games and ego-preserving strategies."
Posted by Mr. Lee at 2:17 AM No comments:

Labels: Quote Of The Week, Rollo May

Gone With The Light 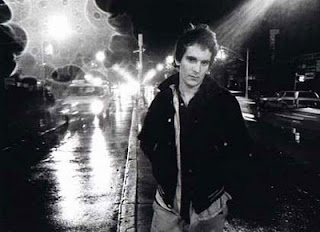 "Children by the million, sing for Alex Chilton. When he comes 'round they sing, ‘I’m in love. What’s that song? I’m in love with that song.'"
Alex Chilton
Rest In Peace
Posted by Mr. Lee at 4:02 PM No comments: 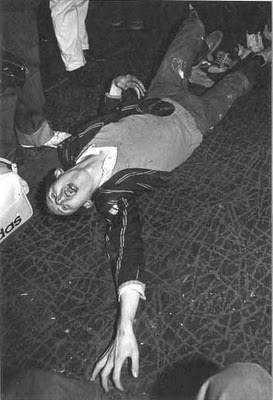 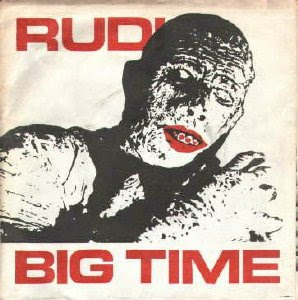 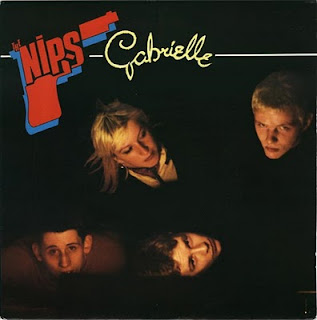 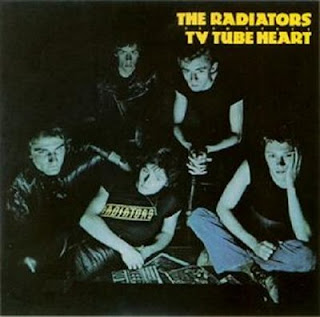 "The truth that many people never understand, until it is too late, is that the more you try to avoid suffering the more you suffer because smaller and more insignificant things begin to torture you in proportion to your fear of being hurt."
Posted by Mr. Lee at 2:17 AM No comments:

Do Not Go Gentle Into That Good Night 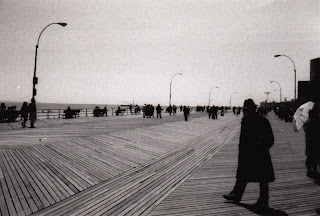 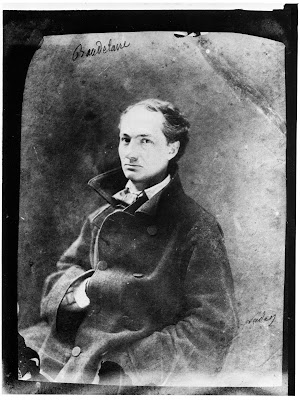 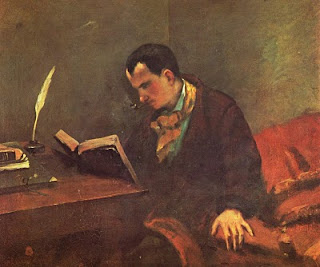 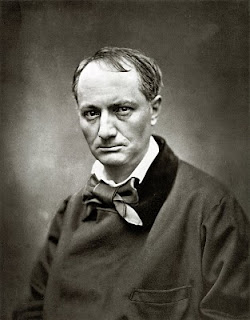 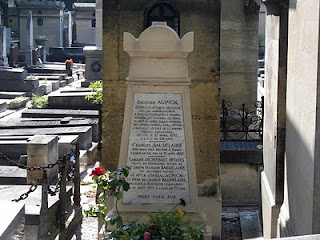 Charles Baudelaire: The Archangel Of Our Alienation
"Charles Baudelaire was a 19th century French poet, translator, and literary and art critic whose reputation rests primarily on Les Fleurs Du Mal (The Flowers Of Evil, 1857) which was perhaps the most important and influential poetry collection published in Europe in the 19th century. Similarly, his Petits Poèmes En Prose (Little Prose Poems, 1868) was the most successful and innovative early experiment in prose poetry of the time.

Known for his highly controversial, and often dark poetry, as well as his translation of the tales of Edgar Allan Poe, Baudelaire's life was filled with drama and strife, from financial disaster to being prosecuted for obscenity and blasphemy. Long after his death many look upon his name as representing depravity and vice: Others see him as being the poet of modern civilization, seeming to speak directly to the 20th century.

In his often introspective poetry, Baudelaire revealed himself as a seeker of God without religious beliefs, searching in every manifestation of life for its true significance, be it in the leaves of a tree or a prostitute's frown. His refusal to admit restriction in the poet's choice of theme and his assertion of the poetic power of symbols makes Baudelaire appealing to modern man, as a poet and a critic." [Empire:Zine]

"Charles Baudelaire, the great French poet of the mid nineteenth century whose powerful writing ushered in a era of symbolism, is one of the most important poets of the nineteenth century. Not only a poet of stunning imagery and extraordinary musicality, he was also one of the first to herald that new consciousness — urban, pushing at the edges of things, uncertain of itself — which we, today, still recognize as our own modern way of being.

Baudelaire life was almost as important as his poetry. His rejection of bourgeois values, his use of drugs, his fascination with sex, his close friendships with painters and other poets: all of these made him a sort of model for the poet as a 'bohemian' figure. He is the archetype of the poet as someone who lives his own life on the fringes of society, rebellious in lifestyle, dedicated to moving so far beyond the middle class that his work shocks them so deeply that they either cry out, 'but is it art?' or attempt to censor it as blasphemous, evil, and pornographic." [Huck Gutman] 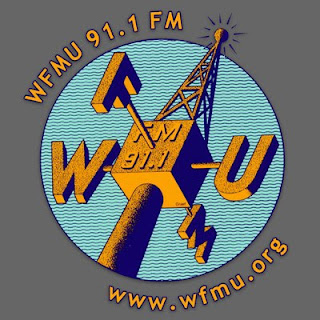 "Hands down, WFMU, is the greatest radio station on the planet. First, because of the content: an endless river of amazing music from everywhere, and DJ's with unusual taste and ideas that actively confront and counteract the mainstream mind-rot... And second: no commercials, no playlists, and no evil corporate overlords. It's 'free-form' in the best sense, and 100% listener supported. WFMU celebrates the imagination and reclaims the gifts of expression often left lying around in the attics, basements, and ditches of our force-fed culture." -Jim Jarmusch
Dig: No Hits, All The Time (NY Times)
Posted by Mr. Lee at 11:58 AM No comments:

"The notion of ambiguity must not be confused with that of absurdity. To declare that existence is absurd is to deny that it can ever be given a meaning; to say that it is ambiguous is to assert that its meaning is never fixed, that it must be constantly won. Absurdity challenges every ethics; but also the finished rationalization of the real would leave no room for ethics; it is because man's condition is ambiguous that he seeks, through failure and outrageousness, to save his existence."
Posted by Mr. Lee at 2:17 AM No comments:

I Am A Book I Neither Wrote Nor Read

I am a book I neither wrote nor read,
A comic, tragic play in which new masquerades
Astonishing as guns crackle like raids
Newly each time, whatever one is prepared
To come upon, suddenly dismayed and afraid,
As in the dreams which make the fear of sleep
The terror of love, the depth one cannot leap.

How the false truths of the years of youth have passed!
Have passed at full speed like trains which never stopped
There where I stood and waited, hardly aware,
How little I knew, or which of them was the one
To mount and ride to hope or where true hope arrives.

I no more wrote than read that book which is
The self I am, half-hidden as it is
From one and all who see within a kiss
The lounging formless blackness of an abyss.

How could I think the brief years were enough
To prove the reality of endless love?
Posted by Mr. Lee at 6:21 PM No comments:

"All truth passes through three stages. First, it is ridiculed. Second, it is violently opposed. Third, it is accepted as being self-evident."
Posted by Mr. Lee at 2:17 AM No comments:

Labels: Arthur Schopenhauer, Quote Of The Week
Newer Posts Older Posts Home
Subscribe to: Posts (Atom)
Achilles In The Alleyway is a journal of art, prose, poetry, photography, politics, philosophy, life, death, and all the sounds that lie in between, over, under, sideways, and down.
All writing herein is copyrighted by Mr. Lee, unless otherwise credited.
All MP3s are posted for educational purposes and will be removed if there is an objection from the holder of the original copyright.