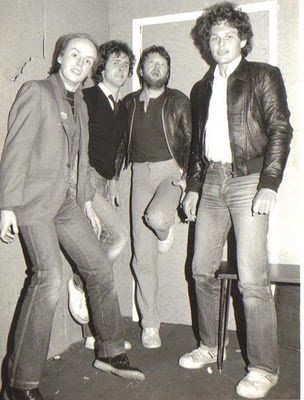 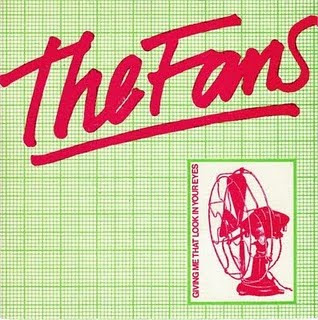 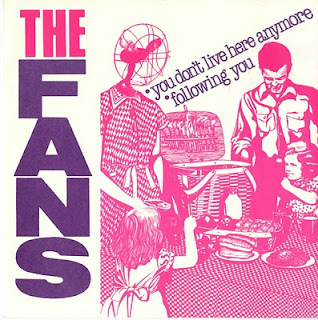 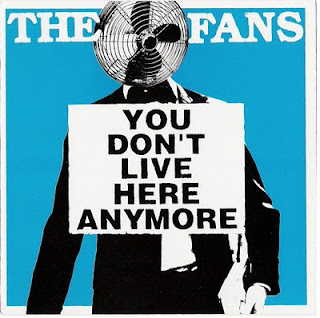 "The Fans were formed in 1978 in Bristol, England. The Bristol music scene was humming at the time and The Fans very quickly became not only one of the city's premier bands but also of the UK. The band were enthralled by the same vision of creating quality songs at a speed which reflected the genre of the time. The principal song writer was George, who had already had chart success with his earlier band George And The Dragons. Rob had already had considerable success with Uncle Po, whose members included Gavin King on vocals (later to form The Private Dicks) and Helen O'Hara (later to join Dexy's Midnight Runners on violin). The Fans first single was an EP released in 1979 on the newly formed Fried Egg record label — "Givin' Me That Look In Your Eyes" c/w "Stay The Night" and their version of the Jim Reeve's song "He'll Have To Go." Following great success, their second single was released on Fried Egg in 1980 with the songs "You Don't Live Here Anymore" c/w "Following You."At this point the band secured a major publishing deal but internal frictions about musical direction caused the band to split. George, Barry and Rob continued to play together for a short while under the name of The Trainspotters, recording an unreleased single "Hold I'm Joe." Barry went on to follow a solo career as a singer songwriter. George moved to France, where he still lives, playing solo and band gigs around the country. Rob went on to play with The Tropics, Tropical Hearts, MHW and Wise Children, as well forming The Skull Academy. Tony became a much sought after session drummer. Both The Fans singles were picked up by Japanese indie label 1977 Records and re-released in 2001." [taken from the band's MySpace page]
(The Fans recently reformed for a tour of Japan and as evidenced by video footage, sound as fantastic as they did in their heyday!)
Download: "Giving Me That Look In Your Eyes"
Buy: You Don't Live Here Anymore (CD)
Posted by Mr. Lee at 1:29 PM No comments:

"They envy the distinction I have won; let them therefore, envy my toils, my honesty, and the methods by which I gained it."
Posted by Mr. Lee at 10:29 AM No comments:

Labels: Quote Of The Week, Sallust

Flowing Into The Night 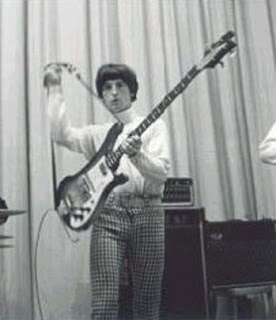 Pete Quaife
Rest In Peace
"Pete Quaife, the original bassist in the Kinks who played with the British Invasion band from their formation in 1961 through 1969, has died, according to a source close to the band. He was 66. The exact cause of death is unknown, but he had been undergoing kidney dialysis for over a decade. Quaife played on all of the early Kinks classics, including "You Really Got Me," "All Day And All of the Night," "Dedicated Follower Of Fashion" and "Waterloo Sunset," which also features his background vocals." ... Story continues here: Original Kinks Bassist Pete Quaife Dead At 66 (Rolling Stone)
"I am overwhelmed with emotion- I literally can't speak- we might never have done any of this without him- Pete was right there at the very beginning - he was a friend and a brother to me-family- me and Pete never argued about anything -WE knew - and he really got it-ALL of it-I Loved him so much- In my naivety I kind of thought we would work again together- - I am shocked beyond words - without Pete there would have been NO Kinks- we went to school together and shared the best times, growing up- we learnt music together as we went along , he was a great musician -you could always trust his playing, creative input, intuitive response to musical ideas-and we taught each other riffs and ideas and shared a common bond of Love, Loyalty and deep friendship-I am in a state of complete disbelief- I knew he was ill - but his cheeky inteligence and optimistic nature would make any one believe that he would Live forever- and in a way Peter Alexanda Greenlaw Quaife you will live in my heart and inner being FOREVER- God Bless you Pete- dear sweet generous - mad and Unique friend- I will never be the same-And I thank God for knowing and working with you - that you enriched and Blessed my LIfe with your sense of fun. wit, intelligence and passion; and optimism- A True musician- a True artist and an immensely gifted Man full of Life and Love -who was never really given the credit he deserved for his contribution and involvlement - - I Love You Pete ! The Kinks were never really the Kinks without you......" -Dave Davies
Posted by Mr. Lee at 3:20 PM 1 comment: 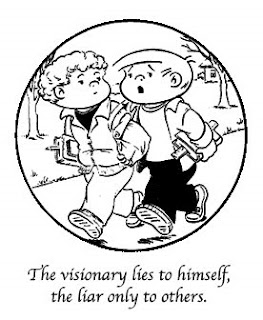 "Be courteous to all, but intimate with few, and let those few be well tried before you give them your confidence. True friendship is a plant of slow growth, and must undergo and withstand the shocks of adversity before it is entitled to the appellation."
Posted by Mr. Lee at 11:22 AM No comments: 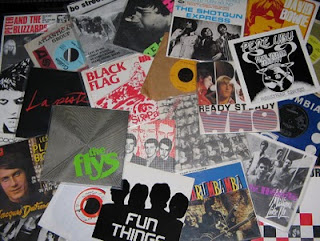 "I think I should have no other mortal wants, if I could always have plenty of music. It seems to infuse strength into my limbs and ideas into my brain. Life seems to go on without effort, when I am filled with music." -George Eliot

"A generation of men is like a generation of leaves; the wind scatters some leaves upon the ground, while others the burgeoning wood brings forth — and the season of spring comes on. So of men one generation springs forth and another ceases."
Posted by Mr. Lee at 12:10 PM No comments:

Labels: Homer, Quote Of The Week 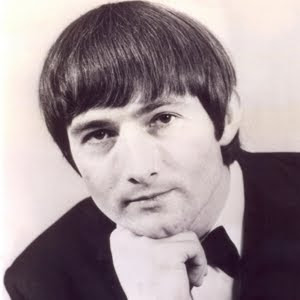 Crispian St. Peters
Rest In Peace
"Crispian St. Peters, a British pop singer of the '60s best known for his buoyant hit "Pied Piper" and his soulful version of "You Were on My Mind," died on Tuesday at his home in Swanley, Kent, England." ... Story continues here: Crispian St. Peters, Singer Of The Hit ‘Pied Piper,’ Dies At 71 (NY Times)
Posted by Mr. Lee at 1:31 PM No comments: 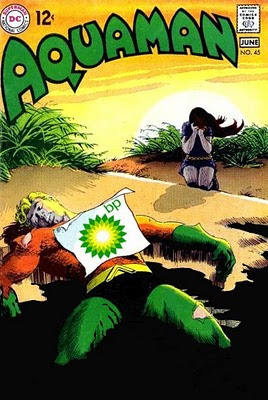 "The memory should be specially taxed in youth, since it is then that it is strongest and most tenacious. But in choosing the things that should be committed to memory the utmost care and forethought must be exercised; as lessons well learnt in youth are never forgotten."
Posted by Mr. Lee at 2:17 AM No comments: 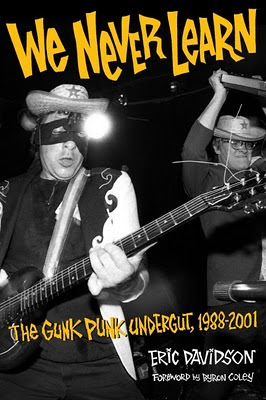 We Never Learn: The Gunk Punk Undergut, 1988-2001 is the first and only book on the last great wave of down-and-dirty rock'n'roll, one whose hangover can still be felt in bars and clubs across the globe. The book is the next chapter in the Please Kill Me/American Hardcore/Our Band Could Be Your Life succession. Musician and journalist Eric Davidson was there as this scene unfolded as the frontman for Ohio punks the New Bomb Turks, and he tracks the roots and history of this largely undocumented movement. This is the last generation of punks and rockers to conquer city after city without the diluting force of the internet.
The Black Lips, the late Jay Reatard, The Dirtbombs, The White Stripes, The Reigning Sound, The Hives — success stories who all sprang from an underground music scene where similarly raw bands, enjoying various degrees of success and hard luck, played in venues ranging from dive bars to massive festivals, but were mostly ignored by a music industry focused on mega-bands and shiny pop stars.
These bands weren’t swept up in the "alternative rock explosion." They played and acted like a bunch of punks, yawned at the Green Days and Offsprings of the world who were supposedly bringing "punk" to the masses, played Sonics bootlegs in their tour vans as much as Iggy Pop, the Ramones or Black Flag, and had soaked up just enough of music biz history to know that they would never be welcomed — even through the servant’s entrance. They reveled in '50s rock'n'roll and '60s garage rock while creating their own wave of gut-busting riffs and rhythm.
The bands that populate this book — The Dwarves, Gories, Supersuckers, Mummies, Oblivians, Billy Childish, Rocket From The Crypt, JSBE, Cheater Slicks, Teengenerate among them — gained little long-term reward from their nonstop touring and brain-slapping records. What they did have was free liquor, good drugs, guilt-free sex, and a crazy good time, all the while building a dedicated fan base that extends across America, Europe, and Japan.
Follow Mr. Lee on Twitter for a chance to win a copy of the book!
Buy: We Never Learn
Dig: We Never Learn (blog)
Dig: We Never Learn NYC release party
Posted by Mr. Lee at 11:25 AM No comments:

Labels: Eric Davidson, New Bomb Turks, punk-rock, We Never Learn
Newer Posts Older Posts Home
Subscribe to: Posts (Atom)
Achilles In The Alleyway is a journal of art, prose, poetry, photography, politics, philosophy, life, death, and all the sounds that lie in between, over, under, sideways, and down.
All writing herein is copyrighted by Mr. Lee, unless otherwise credited.
All MP3s are posted for educational purposes and will be removed if there is an objection from the holder of the original copyright.