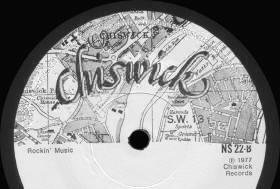 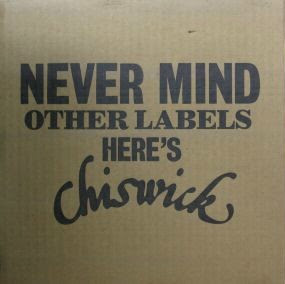 "Chiswick was started in 1975 out of a couple of market stalls selling second hand records in London, and inspired by the American independent labels of the '50s and '60s. Not having a host of great blues and soul artists to hand we recorded the British equivalent and not having the budgets available to the major record companies we recorded fast and cheap. Flushed by the relative success of our first record by the Count Bishops, we scoured the bars and clubs of London for more. Pretty soon we had stumbled over Joe Strummer and his 101ers, finally got a record out of Jesse Hector and his Hammersmith Gorillas, but then along came punk and its perfect cousin power-pop.

As the majors scrambled to get a punk band on board and we narrowly missed signing The Jam, we still put together a descent roster of punk-rock and power-pop acts, including Radio Stars, the Radiators (From Space), Johnny Moped, and a young Jim Kerr-led Johnny & The Self Abusers. Though we avoided The Damned first time out, we eventually signed them for their epic Machine Gun Etiquette and their debut hits. We also had a scattering of hits round the world with Rocky Sharpe And The Replays and Sniff 'N' The Tears, whose "Driver's Seat" became a US Top-20 placing and our biggest record. It was an eclectic enough label, but by the early '80s the charts were dominated by too many men with strange haircuts playing what looked like ironing boards not exactly rock'n'roll. So we moved on from our pop aspirations and sailed quietly into off into the re-issue sunset. But it sure was fun while it lasted." *

"When one admits that nothing is certain one must, I think, also admit that some things are much more nearly certain than others... Certainly there are degrees of certainty, and one should be very careful to emphasize that fact, because otherwise one is landed in an utter skepticism, and complete skepticism would, of course, be totally barren and completely useless."
Posted by Mr. Lee at 12:28 PM No comments: 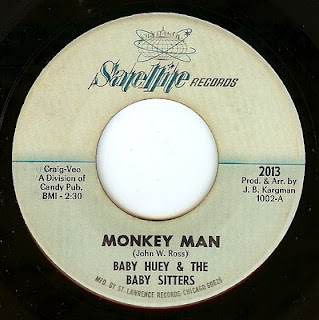 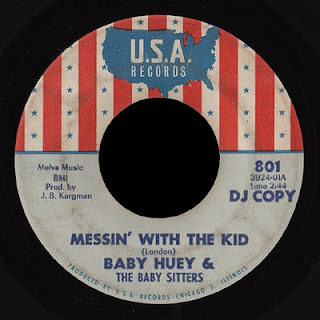 A native of Richmond, Indiana, James Ramey moved to Chicago, Illinois at the age of nineteen, and worked with several local bands as a singer. Due to a "glandular disorder," Ramey was a large man, weighing about 350 pounds His size contributed to his stage presence, but also to health problems. Nevertheless, he made light of his condition, adopting the stage name "Baby Huey" after Paramount Pictures' giant duckling cartoon character of the same name. In 1963, Ramey, organist/trumpeter Melvyn "Deacon" Jones, and guitarist Johnny Ross founded a band called Baby Huey & The Babysitters, which became a popular local act and released several 45 RPM singles, including "Beg Me," "Monkey Man," "Messin' with the Kid" and "Just Being Careful." * [Note: while the group did release five 45s — on three different labels — they were comprised of the same four songs in different couplings.]
Download: "Monkey Man" b/w "Messin' With The Kid"
Dig: The Baby Huey Story (deals with Huey, post-Babysitters)
* Bio taken from Wikipedia
Posted by Mr. Lee at 10:34 AM No comments:

It hit them like a smack in the face; or maybe more like a spank on the rump: The insult of being grouped with those high winds, made it hard to keep steady on the path. The wood creaked on the guard rails, and it all just seemed a bit unsafe. It was like walking the plank, a game that little kids play which was once an unfortunate pirate's death. A thankless job, one that took a certain type of man to complete. It was more of a puzzle.

She felt he was the last piece of blue in the sky, or maybe the missing piece of grass. Leaves of grass in fact. 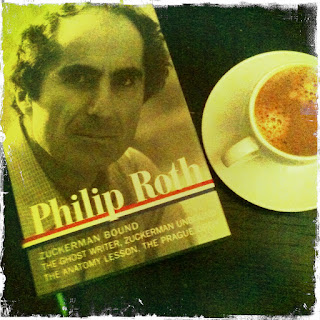 "Regardless of the staggering dimensions of the world about us, the density of our ignorance, the risks of catastrophes to come, and our individual weakness within the immense collectivity, the fact remains that we are absolutely free today if we choose to will our existence in its finiteness, a finiteness which is open on the infinite. In fact, any man who has known real loves, real revolts, real desires, and real will, knows quite well that he has no need of any outside guarantee to be sure of his goals; their certitude comes from his own drive."
Posted by Mr. Lee at 2:17 AM No comments:

Beat Boys In The Jet Age 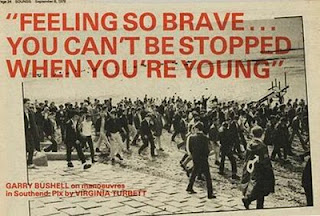 Embedded above is a short BBC documentary on the '79 UK Mod Revival — featuring live clips of The Chords, The Purple Hearts, and The Jam —which aired mere weeks before Quadrophenia hit the silver screen. * While the "revival" scene has been much maligned over the years, many classic tracks came out of the era; tracks that still influence bands to this day. (There were more boss "revival" acts that came a few years later as well, most notably Makin' Time, The Direct Hits, The Times, The Aces, and A.I.T.A. favorites, The Prisoners.)

* Video pulled/removed from YouTube.
** It's impossible to pick a single track from The Jam,
but the lyrics to these two seem to fit the times well.
Posted by Mr. Lee at 2:17 PM No comments:

"One's own free unfettered choice, one's own caprice, however wild it may be, one's own fancy worked up at times to frenzy — is that very "most advantageous advantage" which we have overlooked, which comes under no classification and against which all systems and theories are continually being shattered to atoms. And how do these wiseacres know that man wants a normal, a virtuous choice? What has made them conceive that man must want a rationally advantageous choice? What man wants is simply independent choice, whatever that independence may cost and wherever it may lead."
Posted by Mr. Lee at 11:22 AM No comments:

Your Yesterdays Are All Left Behind 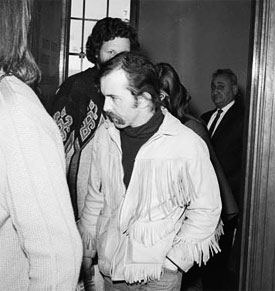 I Can’t Help It If I’m Lucky 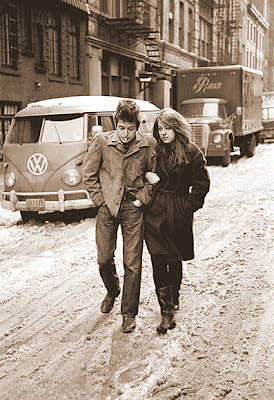 "He wore a very thin jacket, because image was all... I had a sweater on, plus I borrowed one of his big, bulky sweaters. On top of that I put on a coat. So I felt like an Italian sausage. Every time I look at that picture, I think I look fat." -Suze Rotolo, R.I.P.
Download: "Positively 4th Street" by Johnny Rivers
Download: "I'll Be Your Baby Tonight" by Burl Ives
Download: "Series Of Dreams" by Gallon Drunk
Download: "Idiot Wind" by The Coal Porters
Posted by Mr. Lee at 3:21 PM 2 comments: 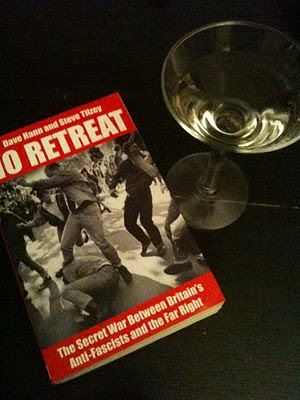 "In the face of the obscene, explicit malice of the jungle, which lacks only dinosaurs as punctuation, I feel like a half-finished, poorly expressed sentence in a cheap novel."
Posted by Mr. Lee at 2:17 AM No comments:

O Little Root Of A Dream

O little root of a dream
you hold me here
undermined by blood,
no longer visible to anyone,
property of death.

Curve a face
that there may be speech, of earth,
of ardor, of
things with eyes, even
here, where you read me blind,

even
here,
where you
refute me,
to the letter.


From Glottal Stop: 101 Poems by Paul Celan
(Translated by Nikolai Popov and Heather McHugh)
Posted by Mr. Lee at 3:48 PM No comments:

Coney Island Of My Mind #5 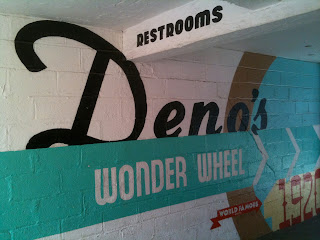 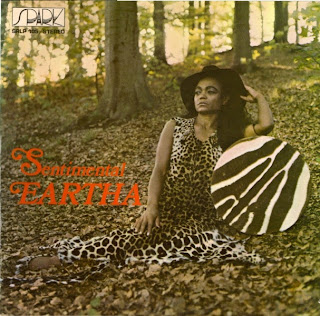 Labels: cover songs, Donovan, Eartha Kitt, MP3, psychedelia
Newer Posts Older Posts Home
Subscribe to: Posts (Atom)
Achilles In The Alleyway is a journal of art, prose, poetry, photography, politics, philosophy, life, death, and all the sounds that lie in between, over, under, sideways, and down.
All writing herein is copyrighted by Mr. Lee, unless otherwise credited.
All MP3s are posted for educational purposes and will be removed if there is an objection from the holder of the original copyright.