Yesterday Don't Matter If It's Gone 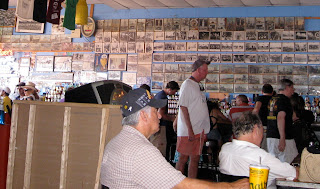 "I'm devastated. [The developer, Zamperla] wants everything new, but that's not what Coney Island's about — it's about nostalgia. People in the summer love to come in for a drink in their bikinis and bathing suits. It won't be the same when they're told to dress up because it's a 'high-class place.'" -Melody Sarrel, owner of Ruby's. [from NY Post]
"In 1975, Rubin Jacobs purchased the 1934 Hebrew National Deli and Bar on a prime spot of boardwalk near Stillwell Avenue. He decorated the space sparsely: a long bar, some tables and chairs, a grill, some old-time photos on the walls. Ruby had spent his whole life in Coney Island." ... Story continues here: Mourning Coney Island Institution, Ruby's Bar, 1934-2010 (Gothamist)
Dig: Frank Gluska of Ruby’s Won’t Be Making You a Fuzzy Navel
Photographs by Lee Greenfeld © 2010
Posted by Mr. Lee at 2:17 PM

last day for Ruby's is the 15th I think,so who is going and when?I myself see a hotdog and a bottle a beer in the near future.seaside.

Sadly, it looks like this past Saturday was the real last day for business; the 15th is the day they are forced to vacate by. Still, perhaps the 15th does merit a trip to pour some beer out in memory of what was one of Brooklyn's best bars!

Update: Ruby's opened again this past Saturday and — along with a handful of other boardwalk business — hired a lawyer to fight the evictions.